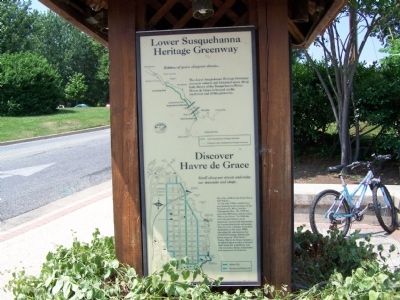 Ribbons of green along our shores...
The Lower Susquehanna Heritage Greenway connects natural and historical areas along both shores of the Susquehanna River. Havre de Grace is located on the southwest end of this greenway.
Discover Havre de Grace
Stroll along our streets and enjoy our museums and shops.
The City of Havre de Grace has a rich history...
In the late 1700s a small town was forming at the junction of the Susquehanna River and the Chesapeake Bay. By 1798 the town had 40 homes and the name "Havre de Grace." In 1840 the town became known as an important commercial intersection for transporting goods and people. The city was a popular recreation destination in the early 1900s attracting the adventurous for waterfowl hunting, fishing and horse racing at "The Graw." Today, Havre de Grace remains a wonderful place to take a leisurely stroll along the waterfront and visit museums, shops, restaurants, and numerous city festivals.

Topics. This historical marker is listed in these topic lists: Entertainment • Environment

More about this marker. Marker contains a map of the Lower Susquehanna Greenway and a map of the City of Havre de Grace.

Related markers. Click here for a list of markers that are related to this marker. Walking tour of Havre de Grace Promenade