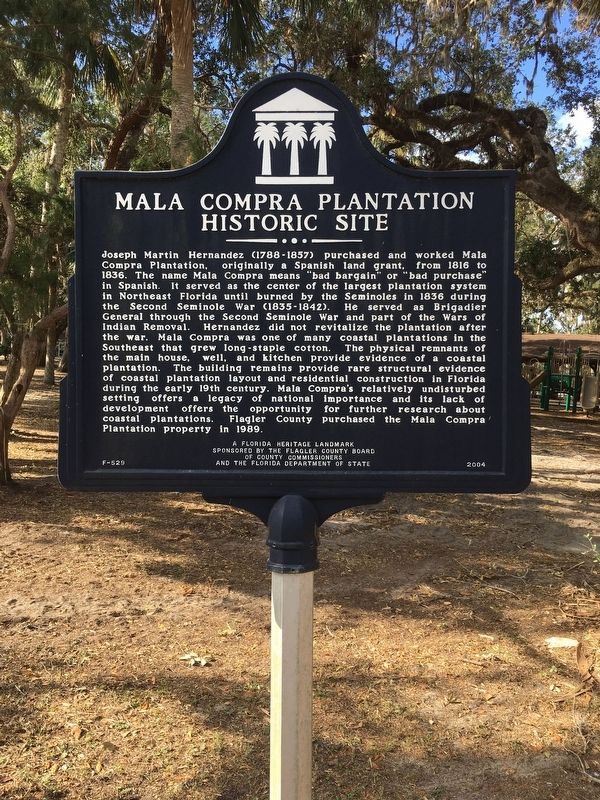 Joseph Martin Hernandez (1788-1857) purchased and worked Mala Compra Plantation, originally a Spanish land grant, from 1816 to 1836. The name Mala Compra means “bad bargain” or “bad purchase” in Spanish. It served as the center of the largest plantation system in Northeast Florida until burned by the Seminoles in 1836 during the Second Seminole War (1835-1842). He served as Brigadier General through the Second Seminole War and part of the Wars of Indian Removal. Hernandez did not revitalize the plantation after the war. Mala Compra was one of many coastal plantations in the Southeast that grew long-staple cotton. The physical remnants of the main house, well, and kitchen provide evidence of a coastal plantation. The building remains provide rare structural evidence of coastal plantation layout and residential construction in Florida during the early 19th century. Mala Compra’s relatively undisturbed setting offers a legacy of national importance and its lack of development offers the opportunity for further research about coastal plantations. Flagler County purchased the Mala Compra Plantation property in 1989. 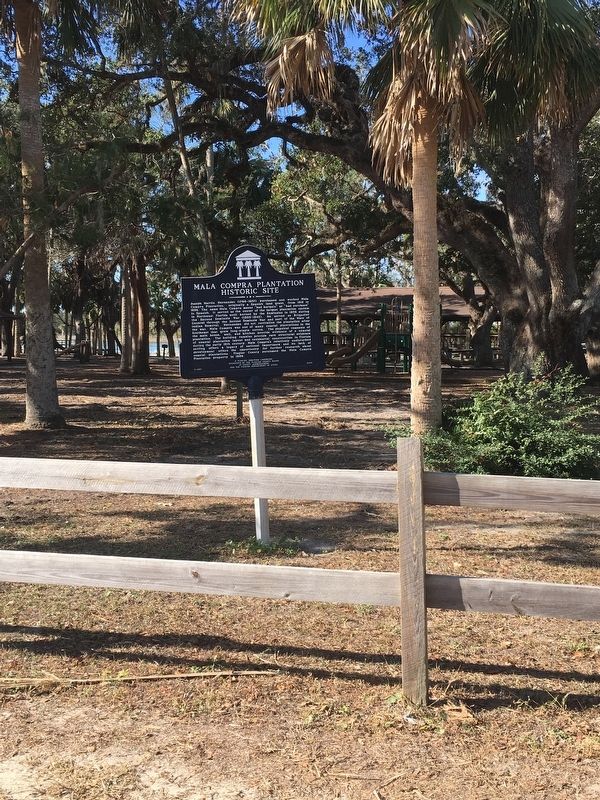 Click or scan to see
this page online
2004 by Flagler County Board of County Commissioners and the Florida Department of State. (Marker Number F-529.)

Topics. This historical marker is listed in these topic lists: Agriculture • Anthropology & Archaeology • Settlements & Settlers • Wars, US Indian. A significant historical year for this entry is 1816. 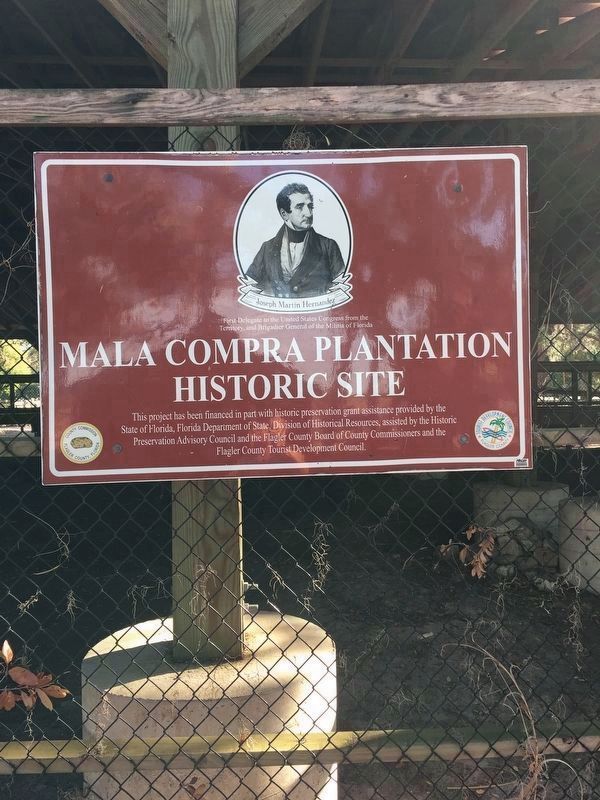 Additional commentary.
1. Text of additional marker "Archaeologists and Historians Look for Clues" (photo #5)
Experts have used early maps, historical descriptions and excavations to piece together what Mala Compra plantation was like in the early 19th century.

The Kitchen/Washhouse
A historic account described a 1 ½ story frame building on a stone foundation measuring 18 by 30 feet. It had 9 windows, 3 doors, plastered walls, two fireplaces, and a baking oven. The upper room was used to cure tobacco, the lower rooms were a kitchen and a laundry room.
Archaeologists found a building with the approximate dimensions that included two rooms, a double hearth and a possible oven. A tabby floor remains in the laundry room.
The kitchen building had a poured tabby floor outside the eastern side that may have been a covered porch or a patio. It was grooved to drain water away from the building.
The main house and kitchen were built of wood, supported by shaped coquina blocks and tabby mortar.

Tabby
Tabby was a popular concrete-like building material in early Florida composed of lime, sand, oyster shell and water. It could be made into walls, bricks or 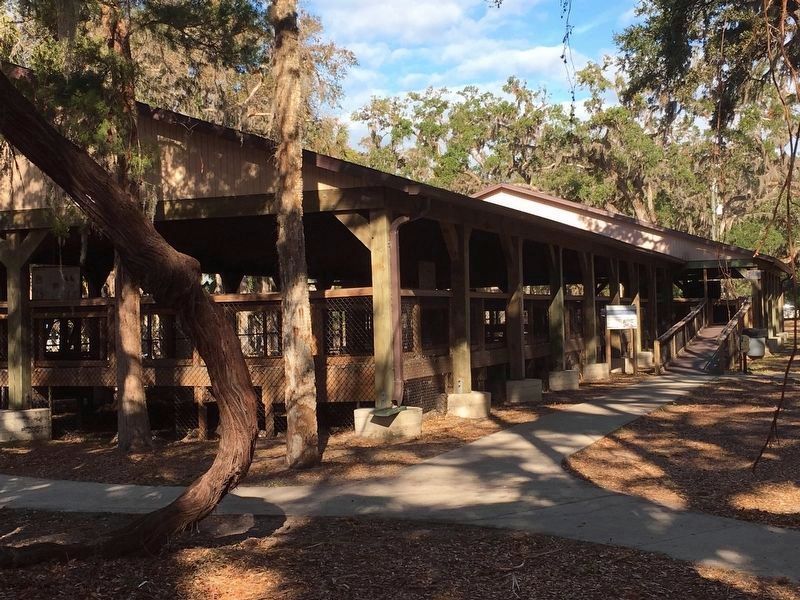 Coquina
Coquina is a local type of limestone formed of tiny shells cemented together. It comes from the Anastasia Formation, and is between 12,000 and 2 million years old. It lies beneath the barrier islands between St. Augustine and Melbourne. At Mala Compra natural formations of coquina lie less than five feet below the surface.

The Well
The walls of a substantial coquina well stand undamaged at Mala Compra, but portions above ground have been rebuilt. The part below the ground is original. It is between the main house and the kitchen.
South of the kitchen building archaeologists found a dense trash deposit and a demolished outbuilding or work area. Almost 3000 artifacts were collected there.

Techniques Bring History To Life
Using shovels and small trowels, archaeologists, with the help of community volunteers, carefully removed the thin layers of soil. They sifted it for artifacts and mapped and photographed color changes seen in the layers.
1998-99 work emphasized exposing the building remains. In 2001, work focused on the search for other cultural features and artifacts. 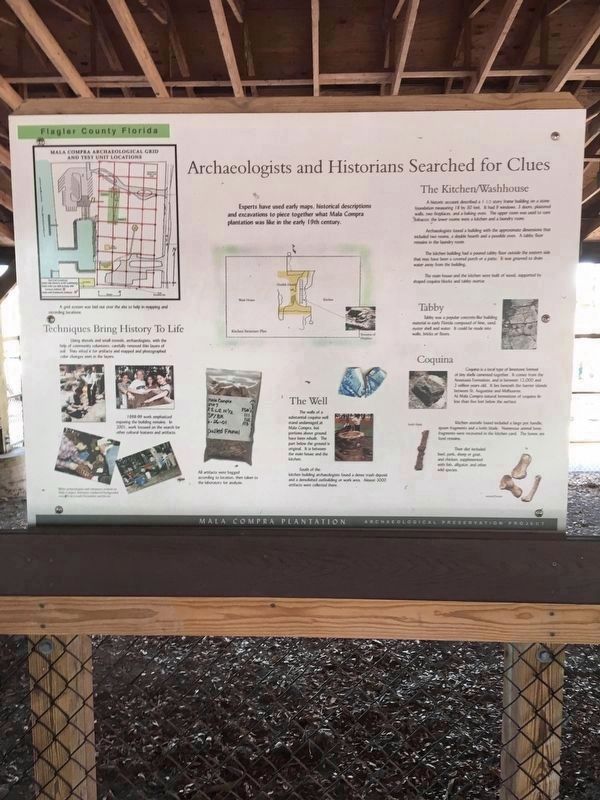 All artifacts were bagged according to location, then taken to the laboratory for analysis.

A grid system was laid out over the site to help in mapping and recording locations.
— Submitted August 1, 2017, by J. Makali Bruton of Querétaro, Mexico.
2. Text of additional marker "The People of Mala Compra" (photo #6)
Workers
Enslaved laborers of African descent worked at Hernandez’s plantations. In 1832 his slaves ranged from one-month-old Lawrence to 65-year-old Lucy. They planted cotton in March, and harvested in the hot days of August, continuing into October. During bad weather, they worked indoors cleaning the cotton. Workers were moved from one Hernandez enterprise to another as needed.
An overseer, William Broadnax, supervised work at Mala Compra and across the river at St. Joseph. Daily work was managed by a driver, who reported to the overseer. Drivers were usually blacks and might be either slave or free.
Cotton plantations on the barrier islands used the task system. When the assigned task was finished, laborers could hunt, fish, or tend their own small cotton crop. Planters allowed a day in the spring for slaves to plant and a day in the fall to harvest 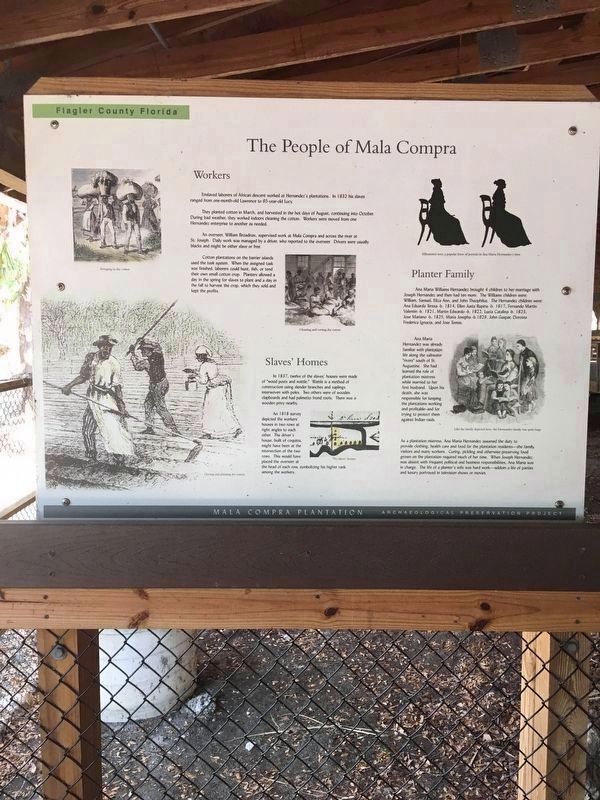 Photographed By Brandon D Cross, November 23, 2016
6. The People of Mala Compra
See the additional comments for this marker's text.
the crop, which they sold and kept the profits.

Slaves’ Homes
In 1837, twelve of the slaves’ houses were made of “wood posts and wattle.” Wattle is a method of construction using slender branches and saplings interwoven with poles. Two others were of wooden clapboards and had palmetto frond roofs. There was a wooden privy nearby.
An 1818 survey depicted the workers’ houses in two rows at right angles to each other. The driver’s house, built of coquina, might have been at the intersection of the two rows. This would have placed the overseer at the head of each row, symbolizing his higher rank among the workers.

Ana Maria Hernandez was already familiar with plantation life along the saltwater “rivers” south of St. Augustine. She had learned the role of mistress while married to her first husband. Upon his death, she was responsible for keeping the plantations working and profitable – and for trying to protect them against Indian raids.

As plantation mistress, Ana Maria Hernandez assumed the duty to provide clothing, health care and food for the plantation residents – the family, visitors and many workers. Curing, pickling and otherwise preserving food grown on the plantation required much of her time. When Joseph Hernandez was absent with frequent political and business responsibilities, Ana Maria was in charge. The life of a planter’s wife was hard work – seldom a life of parties and luxury portrayed in television shows and movies.

Silhouettes were a popular form of portrait in Ana Maria Hernandez’s time.