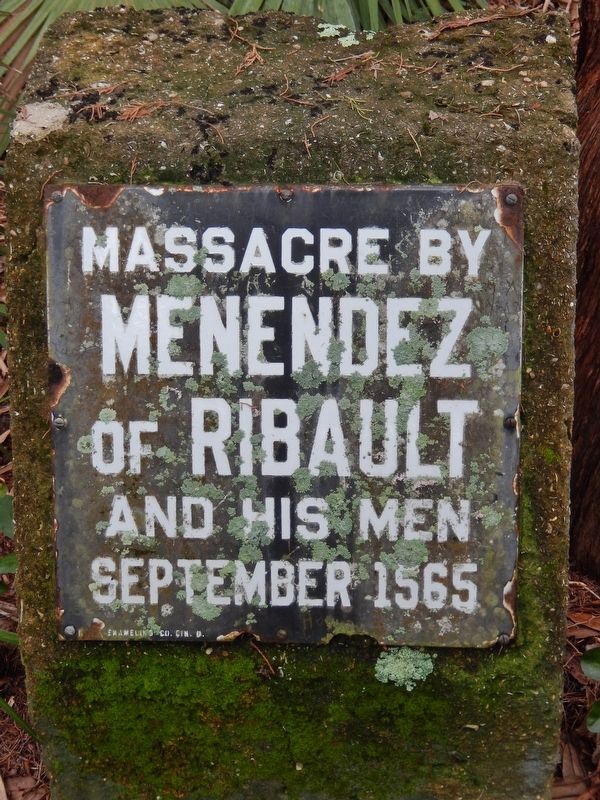 Massacre by
Menendez
of Ribault
and his men
September 1565

Location. 29° 42.84′ N, 81° 13.991′ W. Marker is in St. Augustine, Florida, in St. Johns County. Marker can be reached from A1A Scenic and Historic Coastal Byway (State Highway A1A) 4 miles south of State Highway 206, on the right when traveling south. Marker is located on the Fort Matanzas National Monument grounds, beside the Coastal Hammock Trail boardwalk, near the Matanzas River beach, south of the Fort. Touch for map. Marker is at or near this postal address: 8635 A1A South, Saint Augustine FL 32080, United States of America. Touch for directions.

Other nearby markers. At least 8 other markers are within 4 miles of this marker, measured as the crow flies. Old World Showdown / Reyes y fe (here, next to this marker); Closing the Door / Protegiendo el acceso (about 600 feet away, measured in a direct line); Crumbling Coquina / Piedra frágil (about 600 feet away); Fort Matanzas National Monument 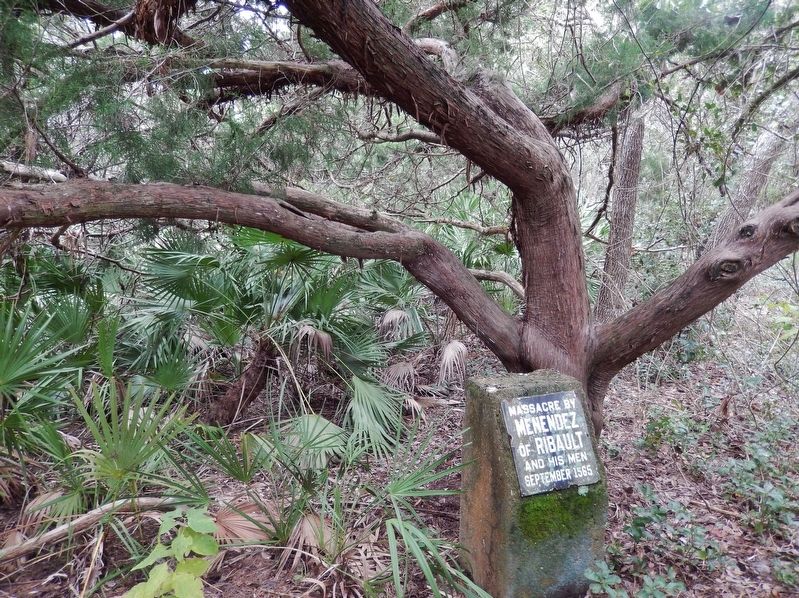 More about this marker. Marker is a large painted porcelain-over-metal plaque, mounted vertically on a knee-high concrete pedestal.

Related markers. Click here for a list of markers that are related to this marker. Fort Matanzas National Monument

Also see . . .
1. The Massacre of the French. Jean Ribault sailed on September 10 to attack and wipe out the Spanish at St. Augustine, but a hurricane carried his ships far to the south, wrecking them on the Florida coast between present-day Daytona Beach and Cape Canaveral. General Pedro Menéndez de Aviles, charged with removing the French, learned from Timucuan Indians that a group of white men were on the beach a few miles south of St. Augustine. He marched with 70 soldiers to where an inlet had blocked 127 of the shipwrecked Frenchmen trying to get back to Fort Caroline. Having lost most of their food and weapons in the shipwreck, they did surrender. However, when Menéndez then demanded that they give up their Protestant faith and accept Catholicism, they refused. 111 Frenchmen were killed. Only sixteen were spared - a few who professed 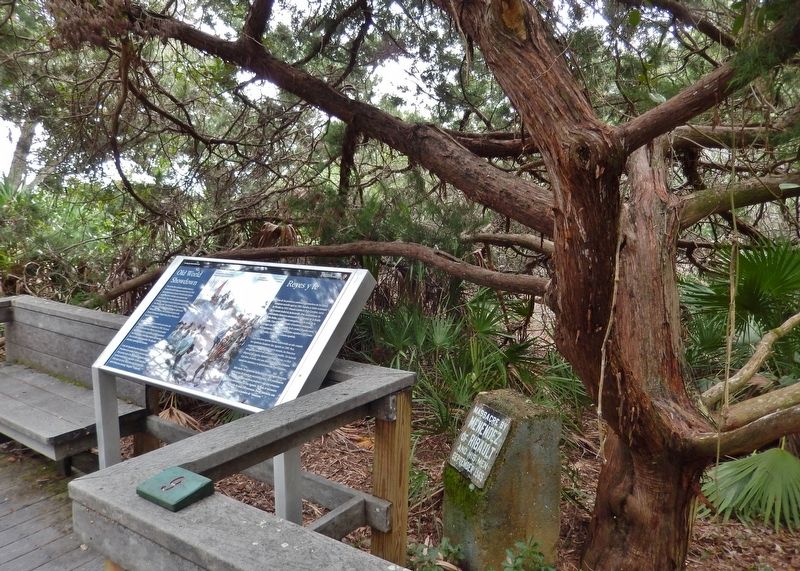 Photographed By Cosmos Mariner, December 13, 2018
3. Massacre by Menendez Marker (wide view; showing location beside boardwalk & related marker)
being Catholic, some impressed Breton sailors, and four artisans needed at St. Augustine. Two weeks later the sequence of events was repeated. More French survivors appeared at the inlet, including Jean Ribault. On October 12 Ribault and his men surrendered and met their fate, again refusing to give up their faith. This time 134 were killed. (Submitted on December 19, 2018, by Cosmos Mariner of Cape Canaveral, Florida.)

2. Massacre at Matanzas Inlet. The motives which impelled Menéndez to commit these deeds of blood should not be attributed exclusively to religious fanaticism, or to racial hatred. The position subsequently taken by the Spanish Government in its relations with France to justify the massacre turned on the large number of the French and the fewness of the Spaniards; the scarcity of provisions, and the absence of ships with which to transport them as prisoners. It is probable that Menéndez clearly perceived the risk he would run in granting the Frenchmen their lives and in retaining so large a body of prisoners in the midst of his colonists; that it would be a severe strain upon his supply of provisions and seriously hamper the dividing up of his troops into small garrisons for the forts which he contemplated erecting at different points along the coast. (Submitted on December 19, 2018, by Cosmos Mariner of Cape Canaveral, Florida.)
Credits. This page was last revised on December 21, 2018. It was originally submitted on December 16, 2018, by Cosmos Mariner of Cape Canaveral, Florida. This page has been viewed 287 times since then and 71 times this year. Photos:   1, 2, 3. submitted on December 19, 2018, by Cosmos Mariner of Cape Canaveral, Florida. • Bill Pfingsten was the editor who published this page.
Share this page.