Native Americans on the Georgia Coast 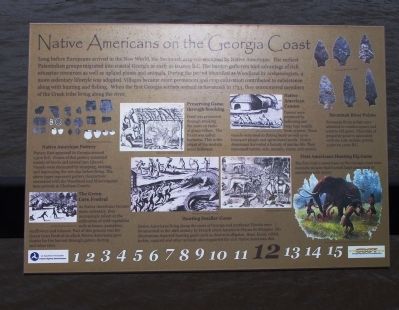 Long before Europeans arrived in the New World, the Savannah area was occupied by Native Americans. The earliest Paleoindian groups migrated into coastal Georgia as early as 10,000 B.C. The hunter-gathers took advantage of rich estuarine resources as well as upland plants and animals. During the period identified as Woodland by archaeologists, a more sedentary lifestyle was adopted. Villages became more permanent and crop cultivation contributed to subsistence along with hunting and fishing. When the first Georgia settlers arrived in Savannah in 1733, they encountered members of the Creek tribe living along the river.
Native American Pottery
( Picture included ) 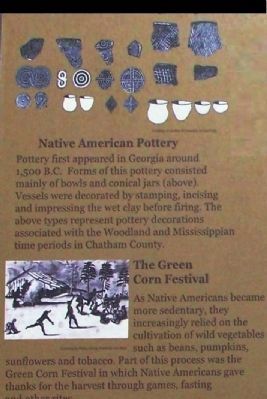 Native Americans on the Georgia Coast Marker
2. Native American Pottery
Pottery first appeared in Georgia around 1,500 B.C. Forms of this pottery consisted mainly of bowls and conical jars (above). Vessels were decorated by stamping, incising and impressing the wet clay before firing. The above types represent pottery decorations associated with the Woodland and Mississippian time periods in Chatham County .

The Green Corn
As Native Americans became more sedentary, they increasingly relied on the cultivation of wild vegetables such as beans, pumpkins, sunflowers and tabacco. Part of this process was the Green Corn Festival in which Native Americans gave thanks for the harvest through games, fasting and other rites.
Americans Hunting Big Game
( picture included )
The first Native Americans on the Georgia coast were nomadic peoples that hunted large game such as mastodon with spears.
Hunting Smaller Game
( Picture included )
Native Americans living along the coast of Georgia and northeast Florida were documented in the 16th century by French artist Jacques le Moyne de Morgues. His illustrations depicted hunting game such as deer and alligator. Bear, bison, rabbit, turkey, squirrel and other animals also supported the rich Native American diet.

Location. 32° 4.792′ N, 81° 5.007′ W. Marker is in Savannah, Georgia, in Chatham County. Marker is on East River Street, on the right when traveling south. West of the E. Broad St. Ramp at Riverside. Touch for map. Marker is in this post office area: Savannah GA 31401, United States of America. Touch for directions. 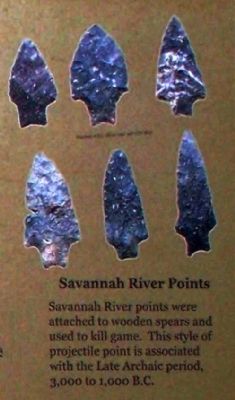 Native Americans on the Georgia Coast Marker
4. Preserving Game through Smoking
Food was preserved through smoking the meat on racks of green willow. The frame was called barbacoa. This is the origin of the modern word barbeque.

Native American Canoes
Canoes were produced by hollowing out large logs usually from cypress. These vessels were used as fishing boats as well as to transport people and agricultural goods. Native Americans harvested a bounty of marine life. They consumed turtles, eels, mussels, clams, and oysters. 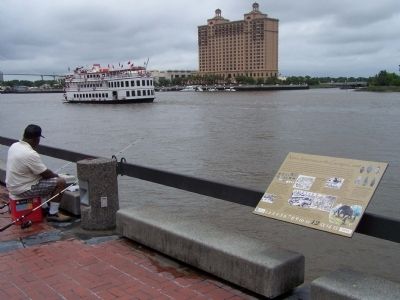