To the Memory of the Pioneers 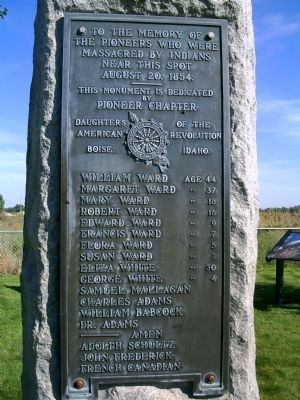 To the memory of the pioneers who were massacred by Indians near this spot August 20, 1854.

This monument is dedicated by Pioneer Chapter
Daughters of the American Revolution Boise, Idaho

Erected by Pioneer Chapter, Daughters of the American Revolution.

Topics and series. This historical marker is listed in these topic lists: Notable Events • Settlements & Settlers. In addition, it is included in the Daughters of the American Revolution (DAR) series list. A significant historical year for this entry is 1854. 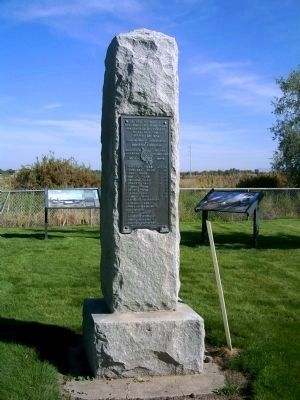 Click or scan to see
this page online
W. Marker is near Middleton, Idaho, in Canyon County. Marker is on Lincoln Road, 0.2 miles east of Middleton Road, on the left when traveling east. Touch for map. Marker is in this post office area: Caldwell ID 83605, United States of America. Touch for directions.

Regarding To the Memory of the Pioneers. The Ward Massacre happened on August 20, 1854. Only two young boys survived an attack by Indians on Alexander Ward's 20 member party of emigrants that were traveling west on the Oregon Trail.

Additional commentary.
1. Contact?
I would like to hear more from the lady who said she was related to the wards.I also am related to the words my great grandma was a ward

Editor's note: PM sent to this comment submitter about the only contact we have that is the one mentioned in the above comment #1. Thank you ~Mark
— Submitted May 7, 2021, by Julia Ann Gleason of Springfield, Oregon.