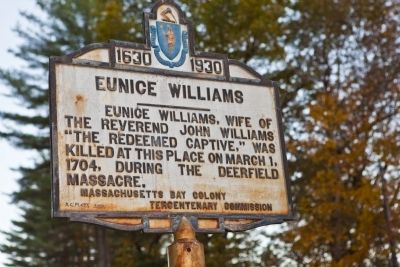 By Russell C. Bixby, October 19, 2009
1. Eunice Williams Marker
Inscription.
Eunice Williams, wife of the Reverend John Williams "The Redeemed Captive," was killed at this place on March 1, 1704, during the Deerfield massacre. . This historical marker was erected in 1930 by Massachusetts Bay Colony - Tercentenary Commission. It is in Greenfield in Franklin County Massachusetts

Eunice Williams, wife of the Reverend John Williams "The Redeemed Captive," was killed at this place on March 1, 1704, during the Deerfield massacre.

Topics and series. This historical marker is listed in these topic lists: Colonial Era • Native Americans • War, French and Indian • Women. In addition, it is included in the Massachusetts Bay Colony—Tercentenary Commission Markers series list.

Location. 42° 38.796′ N, 72° 37.158′ W. Marker is in Greenfield, Massachusetts, in Franklin County. Marker is on Eunice Williams Drive half a mile from Leyden Road, on the left when traveling west. Touch for map. Marker is in this post office area: Bernardston MA 01337, United States of America. Touch for directions.

Other nearby markers. At least 8 other markers are within 5 miles of this marker, measured as the crow flies. Capt. William Turner (approx. 2.8 miles away); Bernardston Veterans Monument (approx. 3.7 miles away); Factory Hollow (approx. 3.8 miles away); Nature's Puzzle 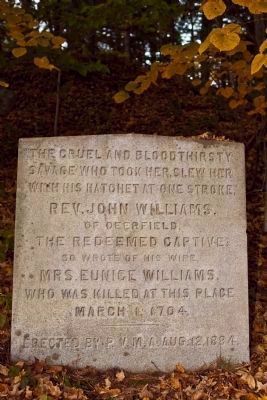 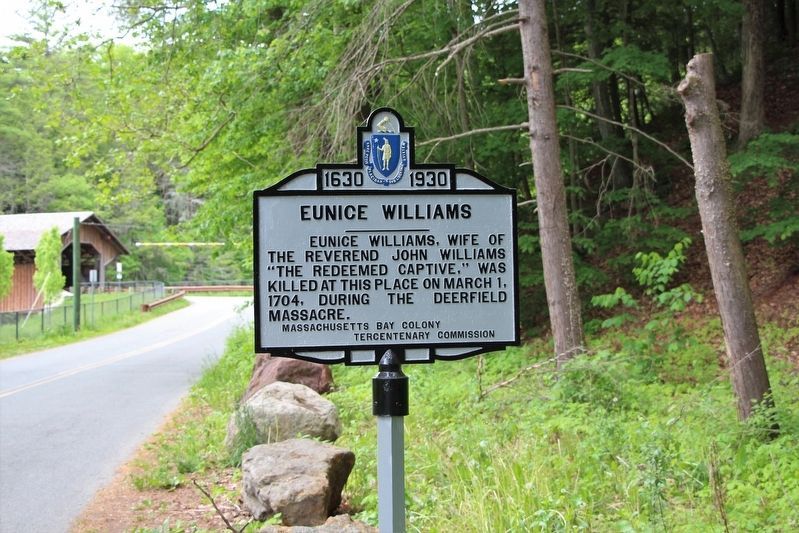