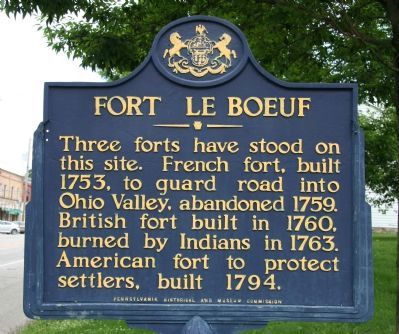 Topics and series. This historical marker is listed in these topic lists: Colonial Era • Forts and Castles • Military • Native Americans • Settlements & Settlers • War, French and Indian • Wars, US Indian. In addition, it is included in the Pennsylvania Historical and Museum Commission series list. A significant historical year for this entry is 1753.

Location. 41° 56.405′ N, 79° 58.952′ W. Marker is in Waterford, Pennsylvania, in Erie County. Marker is on High Street (U.S. 19) north of East 1st Alley, on the left when traveling south. This historical marker is located on the south side of the downtown business district, on the east side of the road. It is on the opposite side of the street from the George Washington Memorial Park, and just 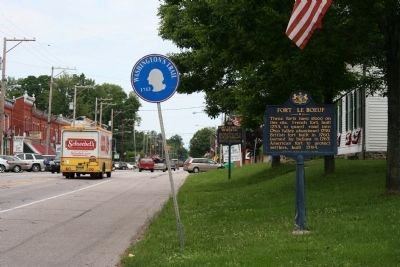 Click or scan to see
this page online
north of the state owned and maintained Fort Le Boeuf history museum. Touch for map. Marker is in this post office area: Waterford PA 16441, United States of America. Touch for directions.

More about this marker. This historical marker is located at the northern end of the "Washington's Trail-1753," which marks the pathway, through Pennsylvania, that George Washington took when sent on his diplomatic mission by Virginia's colonial governor, Governor Dinwiddie, to the French at Fort Le Boeuf, in present day Waterford, Pennsylvania.

Also see . . .  Fort LeBoeuf - Behind the Marker. ExplorePAhistory is your gateway to Pennsylvania, past and present. (Submitted on June 19, 2010, by Dale K. Benington of Toledo, Ohio.) 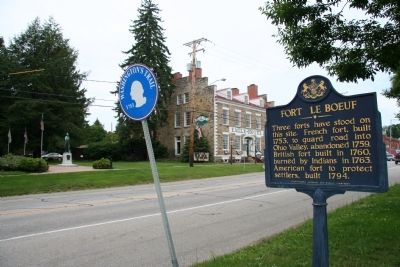 Photographed By Dale K. Benington, June 14, 2010
3. Fort Le Boeuf Marker
View of the historical marker, looking west across the street, at the statue of George Washington that is located in George Washington Memorial Park. 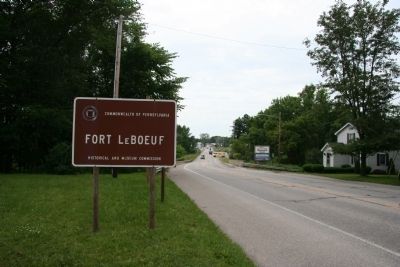