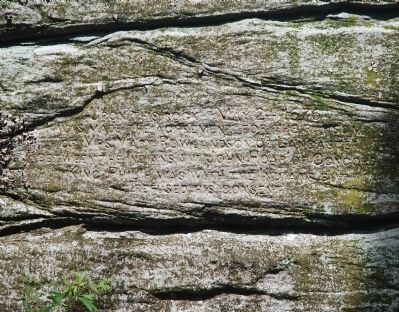 Upon this rock May 2nd 1676 was made the agreement for the ransom of Mrs. Mary Rowlandson of Lancaster between the Indians and John Hoar of Concord. King Philip was with the Indians but refused his consent.

Topics. This historical marker is listed in these topic lists: Colonial Era • Military • Native Americans • Wars, US Indian • Women. A significant historical month for this entry is May 1777.

Location. 42° 30.39′ N, 71° 52.19′ W. Marker is in Princeton, Massachusetts, in Worcester County. Marker can be reached from Worcester Road (Massachusetts Route 140), on the left when traveling west. Marker is not visible from the road, but the rock on which it is carved is (barely). Called Redemption Rock, it is located in the woods to the left of Route 140 when traveling northwest. Touch for map. Marker is in this post office area: Princeton MA 01541, United States of America. Touch for directions.

Other nearby markers. At least 8 other markers are within 6 miles of this marker, measured as the crow flies. Redemption Rock (within shouting distance of this marker); West Village (approx. 3.9 miles away); Patrick Joseph Moran (approx. 4.9 miles away); The Drake Home and the Underground Railroad 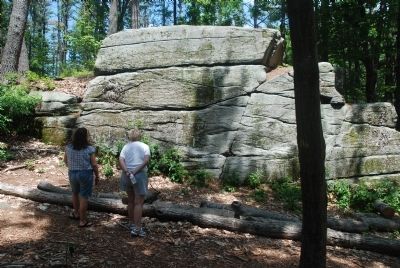 Regarding Site of Mary Rowlandson’s Release. Mary Rowlandson (c. 1637-1711), wife of Lancaster minister Joseph Rowlandson, had been captured with her three children in early February 1676 by a coalition of Nipmucs, Narragansetts, and Wampanoags during King Philip’s War, one of the bloodiest conflicts in American history. During a nearly 12-week ordeal she was separated from her children and moved “up and down the wilderness” (as she later wrote) through what is now central Massachusetts, southern Vermont, and New Hampshire. She escaped the fate of many other Lancaster residents — torture and/or death — by knitting shirts, socks, caps, and similar garments for her captives in return for food.

During captivity Mary met several Native American leaders, including the Wampanoag sachem Metacom himself, called King Philip by the English. 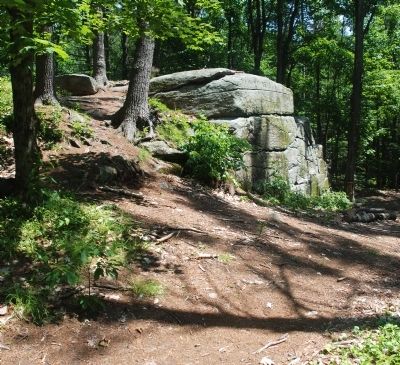 Photographed By Roger W. Sinnott, June 24, 2010
3. Side view of Redemption Rock
Finally in May 1676, John Hoar negotiated her release (when King Philip was not around) and escorted her to Boston, where she was reunited with her husband. Some months later two of the couple’s children were also released, the third having died in captivity.

The above details are mainly from King Philip’s War: The History and Legacy of America’s Forgotten Conflict by Eric B. Schultz and Michael J. Tougias (The Countryman Press, Woodstock, VT, 1999). 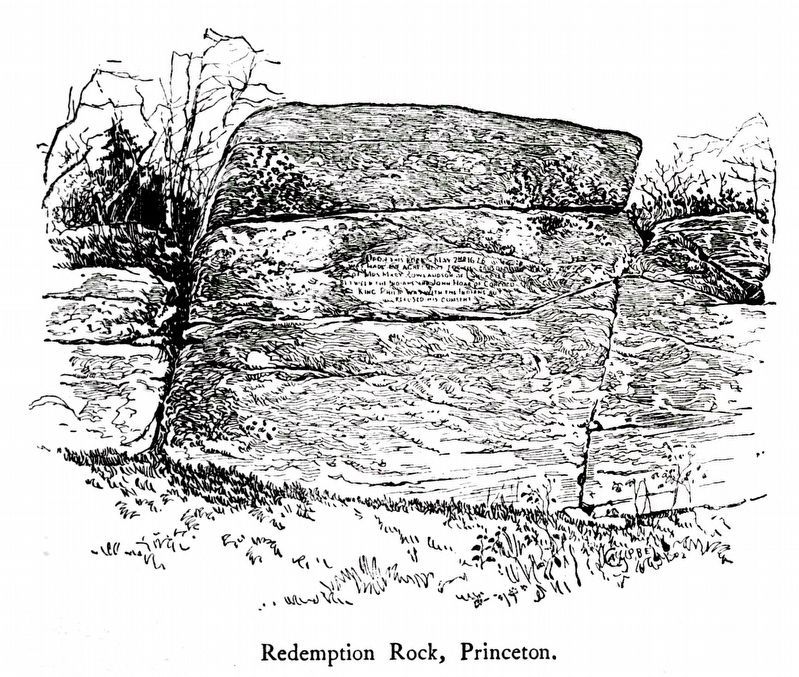