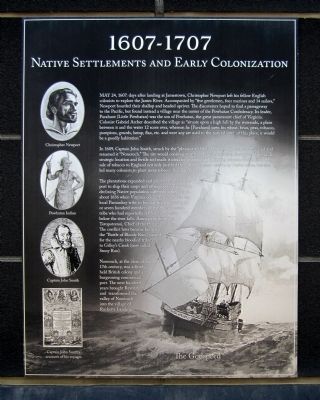 May 24, 1607: days after landing at Jamestown, Christopher Newport left his fellow English colonists to explore the James River. Accompanied by “five gentlemen, four marines and 14 sailors,” Newport boarded their shallop and headed upriver. The discoverers hoped to find a passageway to the Pacific, but found instead a village near the center of the Powhatan Confederacy. Its leader, Parahunt (Little Powhatan) was the son of Powhatan, the great paramount chief of Virginia. Colonist Gabriel Archer described the village as “situate upon a high hill by the waterside, a plain between it and the water 12 score over, whereon he [Parahunt] sows his wheat, bean, peas, tobacco, pompions, gourds, hemp, flax, etc. and were any art used to the natural state of this place, it would be a goodly habitation.”

In 1609, Captain John Smith, struck by the “pleasant and delightful view,” purchased the land and renamed it “Nonesuch.” The site would continue to attract English colonists throughout the era. Its strategic 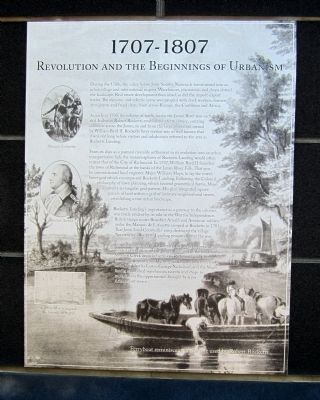 Click or scan to see
this page online
location and fertile soil made it ideal for growing and shipping tobacco. Profits from the sale of tobacco to England not only justified the risk of repeated attacks by Native tribes, but also led many colonists to plant more tobacco than food crops.

The plantations expanded and planters established a port to ship their crops and other goods. The already declining Native population suffered further loss in 1656 when Virginia colonists joined with the local Pamunkey tribe to forcibly drive out some six or seven hundred members of the Shackoconian tribe who had reportedly settled in the valley below the river falls. Among the dead was Totopotomoi, Chief of the Pamunkey. The conflict later became known as the “Battle of Bloody Run,” named for the nearby bloodied tributary to Gilley’s Creek (now called Stony Run).

Nonesuch, at the close of the 17th century, was a firmly held British colony and a burgeoning commercial port. The next hundred years brought Revolution, and transformed the valley of Nonesuch into the village of Rocketts Landing.

North
1707-1807
Revolution and the Beginnings of Urbanism

During the 1700s, the valley below John Smith’s 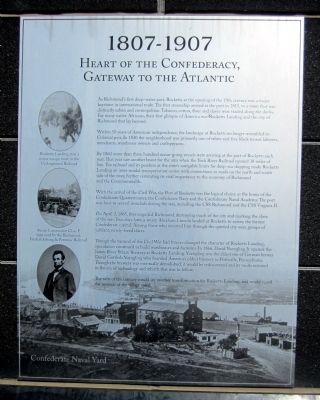 Photographed By Bernard Fisher, April 24, 2012
3. Rocketts Landing (West)
Nonesuch transformed into an urban village and international seaport. Warehouses, plantations and shops dotted the landscape. Real estate development flourished, as did the import-export trades. The dynamic and eclectic scene was peopled with dock workers, farmers, immigrants and freed slaves from across Europe, the Caribbean and Africa.

As early as 1730, the volume of traffic across the James River was such that Irishman Robert Rocketts established a ferry service, carrying colonists across the James, to and from the large plantation owned by William Byrd II. Rocketts’ ferry service was so well known that it was not long before visitors and inhabitants referred to the area as Rocketts Landing.

From its days as a pastoral riverside settlement to its evolution into an urban transportation hub, the metamorphosis of Rocketts Landing would often mirror that of the City of Richmond. In 1737, William Byrd II founded the town of Richmond at the banks of the James River Falls. That year he commissioned local engineer, Major William Mayo, to lay the town’s street grid which encompassed Rocketts Landing. Following the Co1onial philosophy of town planning, which favored geometrical forms, Mayo created a rectangular grid pattern. His plan integrated square parcels of land within a grid of intimate neighborhood streets, establishing a true urban landscape. 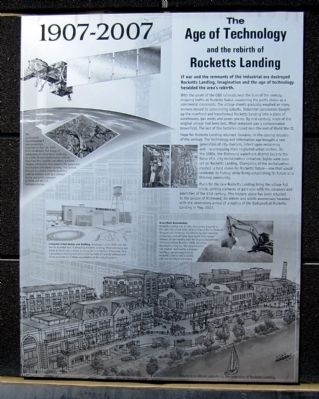 Photographed By Bernard Fisher, April 24, 2012
4. Rocketts Landing (South)
Landing’s importance as a gateway to the colonies was made evident by its role in the War for Independence. British troops under Benedict Arnold and American soldiers under the Marquis de Lafayette camped at Rocketts in 1781. That June, Lord Cornwallis’ army destroyed the village. Nevertheless, Rocketts Landing prospered after the war.

In the final decades of the century, the port’s importance was assured after silting on the James River and at the mouth of Shockoe Creek impeded access to Richmond and forced more commerce downstream. Wealthy landowners and merchants, including Charles Lewis, George Nicholson, and the Mayo family, established warehouses, taverns and shops to capitalize on the opportunities brought by trans-Atlantic commerce.

West
1807-1907
Heart of the Confederacy, Gateway to the Atlantic

As Richmond’s first deep-water port, Rocketts at the opening of the 19th century was a major keystone in international trade. The first steamship arrived at the port in 1815, to a town that was distinctly urban and cosmopolitan. Tobacco, cotton, flour and slaves were traded along the docks. For many native Africans, their first glimpse of America 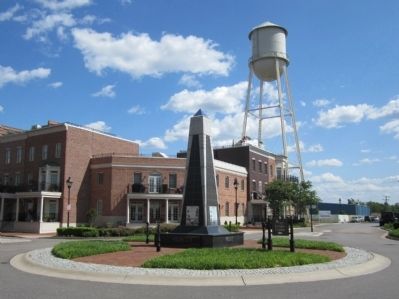 Within 50 years of American independence, the landscape at Rocketts no longer resembled its Colonial past. In 1830 the neighborhood was primarily one of white and free black tenant laborers, merchants, warehouse owners and craftspersons.

By 1860 more than three hundred ocean-going vessels were arriving at the port of Rocketts each year. That year saw another boost for the area when the York River Railroad opened 38 miles of 1ine. The railroad and its position at the river’s navigable limits for deep-sea shipping made Rocketts Landing an inter-modal transportation center with connections to roads on the north and south side of the river, further cementing its vital importance to the economy of Richmond and the Commonwealth.

On April 2, 1865, fires engulfed Richmond, destroying much of the city and marking the close of the war. Two days later, a weary Abraham Lincoln landed at Rockets to survey the former Confederate capital. Among those who escorted him through the quieted city were groups of 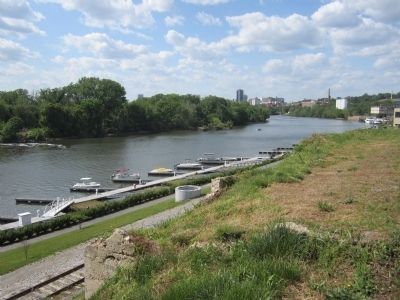 Though the turmoil of the Civil War had forever changed the character of Rocketts Landing, speculators continued to build warehouses and factories. In 1866, David Yuengling Jr. opened the James River Steam Brewery at Rocketts Landing. Yuengling was the eldest son of German brewer David Gottlieb Yuengling who founded America’s oldest brewery in Pottsville, Pennsylvania. Though the brewery was eventually demolished, it would be rediscovered and its vaults restored in the era of technology and rebirth that was to follow.

The turn of the century would see another transformation for Rocketts Landing, and would signal the renewal of the village spirit.

If war and the remnants of the industrial era destroyed Rocketts Landing, imagination and the age of technology heralded the area’s rebirth.

With the onset of the C&O railroads near the turn of the century, shipping traffic at Rocketts faded, weakening the port’s status as a commercial crossroads. The village 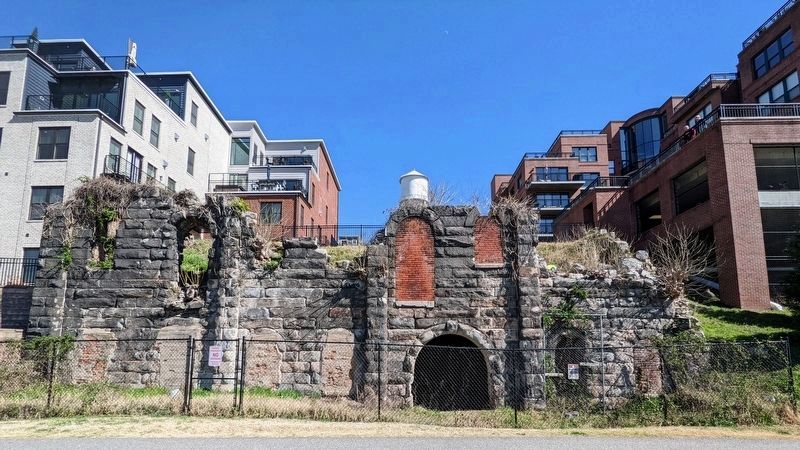 Photographed By Bernard Fisher, March 8, 2022
7. James River Steam Brewery underground “lager”
streets gradually emptied as many workers moved to surrounding suburbs. Industrial speculators bought up the riverfront and transformed Rocketts Landing into a place of warehouses, gas works and power plants. By mid-century, much of the original village had been lost. What remained was a contaminated brownfield. The last of the factories closed near the end of World War II.

Hope for Rocketts Landing returned, however, in the closing decades of the century. The technology and information age brought a new generation of city-dwellers, intent upon reclaiming and re-energizing their neglected urban centers. In the 1980s, the Richmond waterfront district became the focus of a city revitalization initiative. Sights were soon set on Rocketts Landing. Champions of the revitalization created a bold vision for Rocketts’ future—one that would celebrate its history while firmly establishing its future as a thriving community.

Plans for the new Rocketts Landing bring the village full circ1e, uniting elements of past eras with the advances and amenities of the 21st century. This historic place has been returned to the people of Richmond, its rebirth and 400th anniversary heralded with the celebratory arrival of a replica of the Godspeed at Rocketts Landing in May, 2007.

(sidebars)
The government owned Landsat 7 was successfully launched on April 15, 1999 from the Western Test Range of Vandenberg Air Force Base, California, on a Delta II expendable launch vehicle. Data from this satellite and others, provided imaging information that aided in the layout and construction of Rocketts Landing. The Landsat Program is a series of Earth-observing satellite missions built by Lockheed Martin and jointly managed by NASA and the U.S. Geological Survey.

Computer Aided Design and Drafting, developed in the 1950s and70s, was an essential tool in designing Rocketts Landing. What previously was drawn by hand now is drawn on computer in a fraction of the time. It is a geometry authoring tool which involves both 2D and 3D software and allows accurate and lifelike visualization of the unbuilt project.

Brownfield Remediation
Rocketts Landing was an idle, abandoned property in the later half of the 20th century. Site of the Confederate Shipyard and numerous manufacturing and industrial companies, contaminates were found that needed removal. In partnership with the Virginia Department of Environmental Quality’s (DEQ) Voluntary Remediation Program, the contamination was treated, removed to a disposal facility or sealed away turning Rocketts Landing into a usable, safe and healthy environment.

(captions)
1973 / 2010
Return to a vibrant waterfront, the evolution of Rocketts Landing

Topics. This historical marker is listed in these topic lists: Colonial Era • Settlements & Settlers • War, US Civil • Waterways & Vessels. A significant historical month for this entry is April 1989.

Location. 37° 30.979′ N, 77° 24.909′ W. Marker is near Richmond, Virginia, in Henrico County. Marker is at the intersection of Rocketts Way and Old Main Street on Rocketts Way. Touch for map. Marker is at or near this postal address: 5000 Old Osborne Tpke, Henrico VA 23231, United States of America. Touch for directions.