The human carnage of the American Civil War led Congress in 1862 to authorize President Lincoln to purchase cemetery grounds to be used as national cemeteries. By 1870, the remains of nearly 300,000 Union dead had been buried in 73 national cemeteries. As of late 2018, there are 150 National Cemeteries, with the Department of Veterans Affairs' National Cemetery Administration maintaining most, while the US Army and the US Department of the Interior maintain several, with more than four million veterans of all US wars interred. This series is intended to capture all markers about these national cemeteries as well as any war and veterans memorials on their grounds. 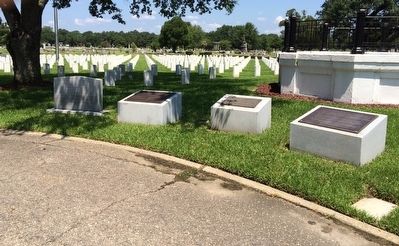 By Mark Hilton, July 26, 2015
Memorial amongst others in Magnolia Cemetery.